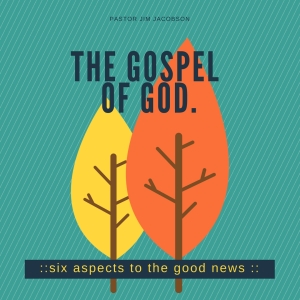 “…Jesus came into Galilee, preaching the gospel of God…” -Mark 1:14

The Bible declares the message that Jesus preached as good news –eugellion. It is a good message. I recently published a six-part blog post at www.calvaryarlington.com and I wanted to share all six parts here.

1. The gospel is good news of truth.

Jesus has come and declared to man the truth about God. Prior to His advent, men only groped for Him. Job said: “Oh that I knew where I might find Him, That I might come to His seat!” (Job 23:3) But, now in the person of Christ, we can see Him clearly.
Paul calls the gospel the “word of truth” in Col. 1:5 for it is the word that reveals God in the person of His Son, Jesus, who declared Himself “the Truth” (John 14:6)

The writer of Hebrews put it the following way: “And He (Jesus) is the radiance of His (God’s) glory and the exact representation of His nature…” -Hebrews 1:3

Simply put, if you want to know God, all you have to do is look to Jesus. (Tweet This)

Not only does the gospel give us the truth about God, but also the truth about the nature of man. The gospel message includes the nature of man as sinners in need of salvation. This part of the good news is often rejected as men like to see themselves in a better light than God declares. Nevertheless, the concept of salvation cannot be true without a precondition of helpless wrong. The truth of the gospel is that though man is declared sinful and alienated from God, Jesus provides forgiveness and salvation to all who will turn to Him, confess their sin, and follow.

2. The gospel is good news of hope.

The Bible makes it pretty clear that apart from Christ, we are/were without hope. Paul wrote to the Ephesians that their prior state was: “…having no hope and without God in the world.” Ephesians 2:12

William Barclay writes: “The ancient world was a pessimistic world. Seneca talked of ‘our helplessness in necessary things.’ In their struggle for goodness men were defeated. The coming of Jesus brings hope to the hopeless heart.”

I can think of two aspects to that hope… one, that we , by the power of the Holy Spirit within us, no longer have to yield in submission to every temptation. The gospel brings us the ability to take “every thought captive to the obedience of Christ” (2 Corinthians 10:5)

Secondly, and perhaps more importantly, the good news gives us the hope that only an actual remedy can. Consider the penalty for sin (death) and the sure and final judgement that awaits every sinner… yet we have hope in the face of this, most certain reality. When we stand before the Father, it will be of no help to rely upon our own good works or merit. Our only hope is in the finished, atoning work of Christ at Calvary, and what a sure hope that is. (Tweet This)

3. The gospel is good news of peace.

The birth announcement of the Christ-Child was one of Peace. Jesus has announced and provided for us, who were formerly at war with God, to be at peace with Him at last. This is the core message of the eugellion -peace! Jesus did “reconcile all things to Himself, having made peace through the blood of His cross…” (Colossians 1:20)

God rightly had charges against us, but Jesus has canceled them, as Paul wrote to the Colossians: “having canceled out the certificate of debt consisting of decrees against us, which was hostile to us; and He has taken it out of the way, having nailed it to the cross.”
(Colossians 2:14)
As though that was not enough, the gospel gives us peace internally, and with others… even every circumstance: “Now may the Lord of peace Himself continually grant you peace in every circumstance….” (2 Thessalonians 3:16) (Tweet This)

4. The gospel is good news of promise.

People often wrongly attribute the God of the Bible with threats of punishment rather than gifts of goodness. This comes from a wrong understanding of history and ignorance of the gospel message itself. (Tweet This) While it is certainly true that God gave behavioral demands to His children, these laws were intended to provide a framework for a civil society, and when practiced, did so.

But the good news in the New Testament, is not a list of expected behaviors, but an offer made with a promise. The promise is that God will grant, to those who put their trust in Him, a righteous position in spite of our inability to comply with the righteous demands of His law. The Bible says that God  “made Him who knew no sin to be sin on our behalf” and that “we might become the righteousness of God in Him.”  (2 Corinthians 5:21) This is the great exchange -our sin, for His right standing.

This is backed up with promise… it’s not just a nice idea.

Paul proclaimed that Jesus was Himself the promise…  “From the descendants of this man, according to promise, God has brought to Israel a Savior, Jesus…”  –Acts 13:23

And it is a promise backed up with evidence… “And we preach to you the good news of the promise made to the fathers, that God has fulfilled this promise to our children in that He raised up Jesus…” –Acts 13:32-33

The eugellion of Christianity tells of a God who is more ready to give than we are to ask, but give He will, to those who respond to His promise of salvation.

5. The gospel is good news of immortality.

People have forever been concerned about what happens after this life is over, and since death is as certain as the sun rising… as they say, the death rate is one per person… it’s a valid concern. Jesus Christ changed everything about how we should look at death, because He conquered it’s literal and emotional hold on us. (Tweet This) He declared many things, such as “I am the way, the truth, and the life” (John 14:6) as well as “I am the resurrection and the life…” going a step further… “he who believes in Me will live even if he dies” (John 11:25)
These are substantial claims, and they are backed up with evidence that He is in fact what and who He claimed. He raised Lazarus ( John 11) and He himself was raised from the dead… a miracle attested to by all of the gospel authors, the apostles, and untold millions since then, who give testimony to His transformative life.

The truth is, you will live forever.
You were created in the image of God as an eternal soul. And YOU can decide your eternal destination -life with Christ or eternal seperation from Him, –and that should be an easy choice!  When an individual puts trust in Jesus’ and believes His promises, they needn’t have a fear of death, because death becomes a transference of the soul from this place to the presence of Christ -as Paul put it: “we are of good courage, I say, and prefer rather to be absent from the body and to be at home with the Lord.”(2 Corinthians 5:8)

This author echos the Apostle John with the following words:
” These things I have written to you who believe in the name of the Son of God, so that you may know that you have eternal life. (1 John 5:13)

6. The gospel is good news of salvation.

The term “salvation” can be broken down into three different and distinct parts.
First there is is justification, which is the removal of guilt and the just penalty for sin coupled with imputed righteousness. This is the great exchange of the gospel, -the sinner exchanges his sin for the righteousness of Christ, thus he or she is “saved” from the penalty of sin.

Next comes sanctification –a progressive work of God by the power and presence of the Holy Spirit in the life of the believer, in which the subject is growing in knowledge and Christ-likeness. This process is one that is begun as an internal work but becomes evident in visible fruit of the Spirit. In the process of sanctification, it is not as though the Christian becomes sinless, but over time our thoughts and actions come into conformity to Christ.

The process of salvation is complete in the third part –glorification. According to Greek scholar Kenneth Wuest, it is “the act of God transforming the present bodies of believers into perfect, sinless, deathless bodies.” As John the Apostle wrote: “Beloved, now we are children of God, and it has not appeared as yet what we will be. We know that when He appears, we will be like Him, because we will see Him just as He is.” (1 John 3:2) Paul says at the presence of Christ…  “in a moment, in the twinkling of an eye, at the last trumpet; for the trumpet will sound, and the dead will be raised imperishable, and we will be changed.” (1 Corinthians 15:52)

Another way that I have heard the word salvation explained is… It is a past action, having both present and future results.
The past actions are Jesus’ life death and resurrection, our sin condition, and our acceptance of His substitutionary death.
The present result is our current (justified) standing before God -forgiven, accepted, and secure.
The future result is our sealed position in heaven.

If you are a believer in Jesus, and have repented of sin, trusting in Him -You are saved! That is good news indeed.
If you have not yet trusted Christ, I pray that you will receive Him today and be saved from your sin, entering into relationship with God through Jesus.
Simply ask Jesus to forgive you of your sin and trust Him with your life.

One thought on “The Gospel Of God”

Jim is a husband, and father of four, serving as a Pastor of Calvary Arlington in Arlington, WA. www.calvaryarlington.com Follow him on twitter as @jimjacobson, Instagram, or Facebook at http://www.facebook.com/jimjacobson64 View all posts by Jim Jacobson